It was cloudy, rainy, and cold, yet you couldn’t tell it by the warm smiles that abounded in the studio.

Seattle SmugMug User’s Group photographers volunteered to photograph portraits of special needs children and their families. These families are members of the Starlight Children’s Foundation of Washington. 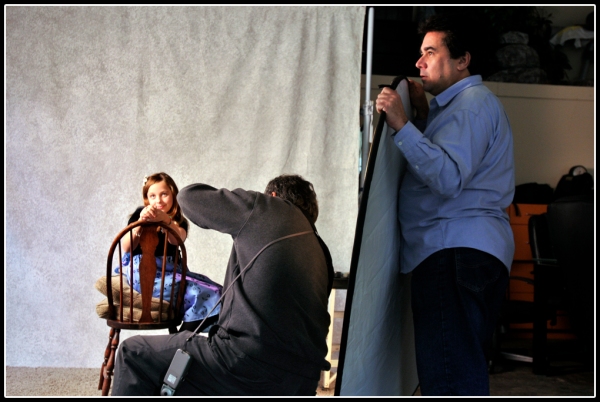 Seattle SMUG organizer Earnie Glazener worked diligently to organize these shoots. There are multiple shoots in multiple locations. The one I was coordinator for was yesterday in Mulikiteo. There are half a dozen more in as many places.

Erin Kohlenberg acts as the model while we test the lights. ©2010 Paul Conrad

The free portrait sessions were held at the Seattle Photography Associates (SPA) Studio in Mulkiteo, Wash. Each family was photographed as a group, and individually. The families will be receiving a free 20×30 print from Bay Photos in Santa Cruz, Calif., with the ability to purchase other prints through the Seattle SMUG site.

It truly was a collaborative effort. As the families arrived, they first had their group portrait taken. Mark Hinwood was the photographer for the groups. Mark just immigrated from England only 2 weeks ago. He earned his bachelor’s degree from Arts University College at Bournemouth. He was excellent with several of the special needs children.

After the group photograph was taken, then families went on to a few several different stations for individual portraits. The lighting for these ranged from monolights to florescent hot lights. The set-ups were simple. Two main light on the left and the right equally placed from the center and with equal power.

Nothing fancy. The goal was to give each family a wonderful experience and a nice print for their wall and memories. That is the goal of this project. 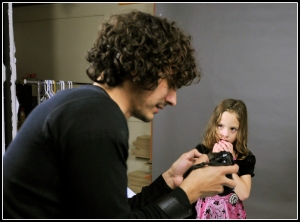 Volunteer photographers Russell Savala, Erin Kohlenberg, Richard Danielson, and Kelsey Kangas helped  the endeavor. These photographers worked diligently to capture some nice individual portraits of each family member. Without the help of these fine people, the shoot would’ve been a little overwhelming.

My role was that of organizer, editor or whatever needed to be done. I was quite happy with that. I did shoot some photos from behind the scenes, which are posted here. One of the reasons I volunteer is that I believe as a member of the community, we should all be giving back to some extent. Due to the sensitivity of the special needs children, I am unable to post any photos of the clients that came for a portrait session. 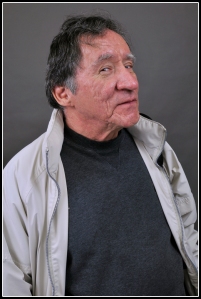 Ric Danielsen as we test the lights. ©2010 Paul Conrad

We as photographers are always taking things: photos, names, time, moments. We have this incredible opportunity to record history, and the talent to do so. We should spend some time giving back and giving to those less fortunate than us. There are those that simply cannot afford, have the time, or have the energy to go to a studio and have their photographs taken. Why not take the time and give these families womething for thier future generations?

It was a fun time overall and a great learning experience. There were both good images and good friends made.

Special thanks go to Earnie Glazener, owner of Eye Lights of Life Photography, for his tireless efforts in organizing this huge endeavor, and When Paddison, director of SPA Studio, for allowing us to invade her space and use the equipment.

And I look forward to the other upcoming shoots for the Starlight Children’s Foundation.

As an update, we’ve done another charity shoot. This time it was with the Virginia Mason Cancer Clinic and cancer survivors.