Last week I bought a high-resolution film scanner by Jumbl. A simple 22MP scanner capable of 35mm film and slides. Super basic. I just need something to get the image into Photoshop so I can tone them properly. It’s not the greatest scanner in the world, but for what I need it for, it’ll work. 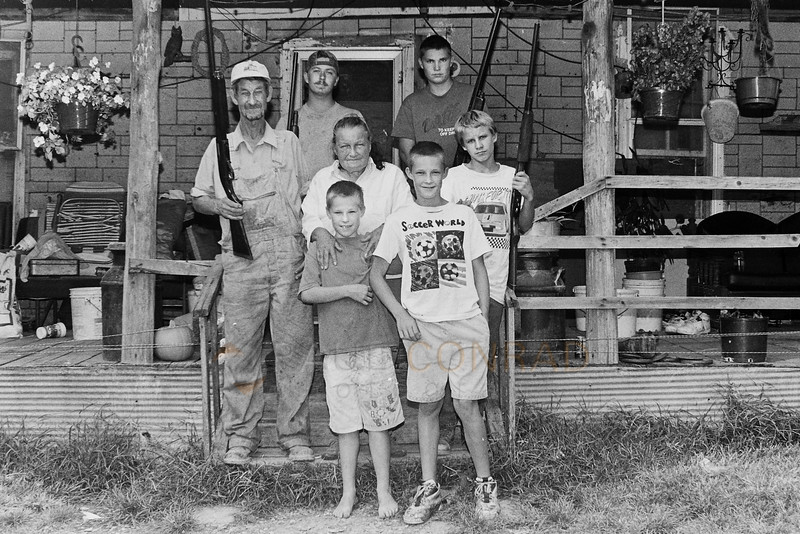 Welcome to Kentucky – The Cardwells at their Ridge Road home in Warren County, Ky. The Cardwells are tenant farmers living with 8 other family members in a patched-together, 120 year old home on Ridge Road. The family makes less than $7,500 per year. (© Paul Conrad/Paul Conrad Photography)

One of the first projects I scanned was an essay I shot while studying photojournalism at Western Kentucky University. It was an assignment by my fave professor David LaBelle. He game a simple theme: Farm Family.

As this was the core course of the program, I took the class very seriously, yet still maintained a sense of humor and had fun. The assignments in this class ranged from simple singles, to complex essays.

The class load was heavy in that we usually had 2 or 3 single assignments as well as a weekly essay project. ON top of all that, we also had to shoot our semester long project on the theme of either “Religion” or “Death of a Loved One.” 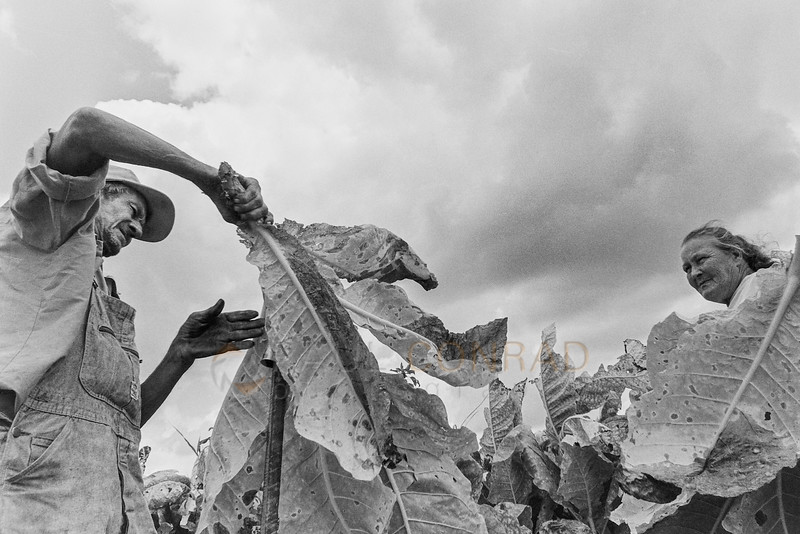 Our assignment was simple – Farm Family.   Document a family who live and work on a farm. The next day I hit up the Warren County farm bureau to ask a few questions: who’s the biggest, who’s the smallest, who’s the richest, who’s the poorest. The gentleman I asked was very accommodating and gave me about 1/2 a dozen names. The Cardwells were not one of them.

However, three of the farmers I talked with mentioned them. I thought it would be good to find them and I was glad I kept pursuing to find my story.

I met them on Jerry Hudnell’s farm late in the afternoon that day. They were working a huge field of tobacco. I introduced myself, told them what I was doing, and they both said they wouldn’t mind. “Harvesting,” above, was shot 10 minutes after meeting them. They were not camera-shy and they were the chatty bunch. 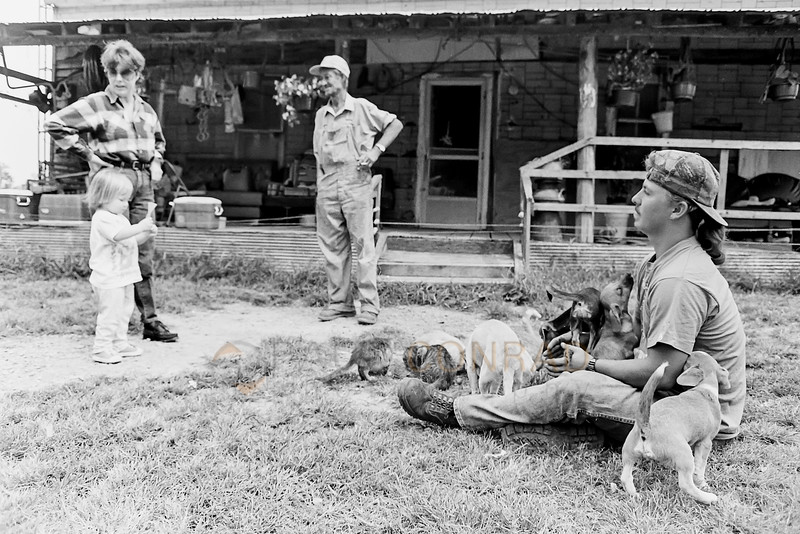 Within an hour, it was quitting time for them. Without hesitation, Billy Ray invited me to his house. It was a humble home. Over 120 years old, it was patched up in places with roofing shingles, had a full-length front porch, only 2 bedrooms, a large front room, kitchen, and of course indoor plumbing.

As there were only a few small windows, it was dark. A few lights helped brighten the home. A challenge none-the-less to photograph inside. Luckily I had a lot of Kodak TMax 3200 and could push it two stops.

After A Long Day 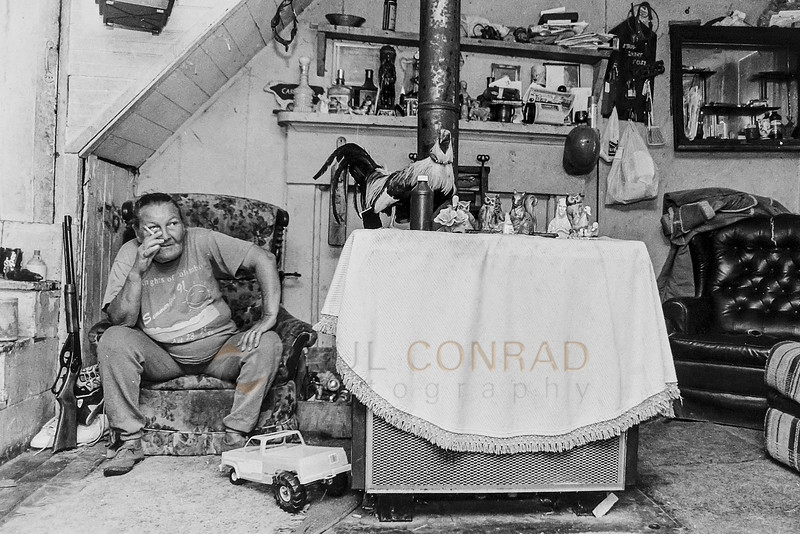 After a Long Day – With only one small window letting Sun in, Nellie Cardwell takes a quiet moment to relax in their Ridge Road home before making dinner. (© Paul Conrad/Paul Conrad Photography)

It as and intriguing situation that taught me a lot: a poor family living day-to-day inviting a stranger into their home. They fed me dinner and I kept shooting and asking questions. After a few hours I left to go to the photo lab and develop my film. Several of my friends and fellow students viewed my negatives and asked how I found them. When I told them they were astonished that finding good photo stories was that easy. 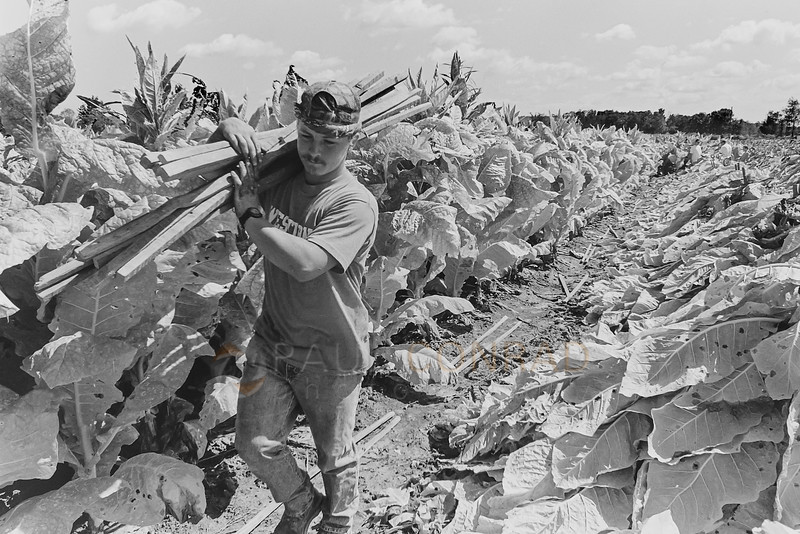 For the next few weeks, my schedule was simple: class in the morning, go to the Cardwells to shoot, develop my film and edit, ponder what images I need for the story as I worked in the lab, come home for dinner, do my homework (I maintained A’s & Bs), go to bed, wake up and do it again. 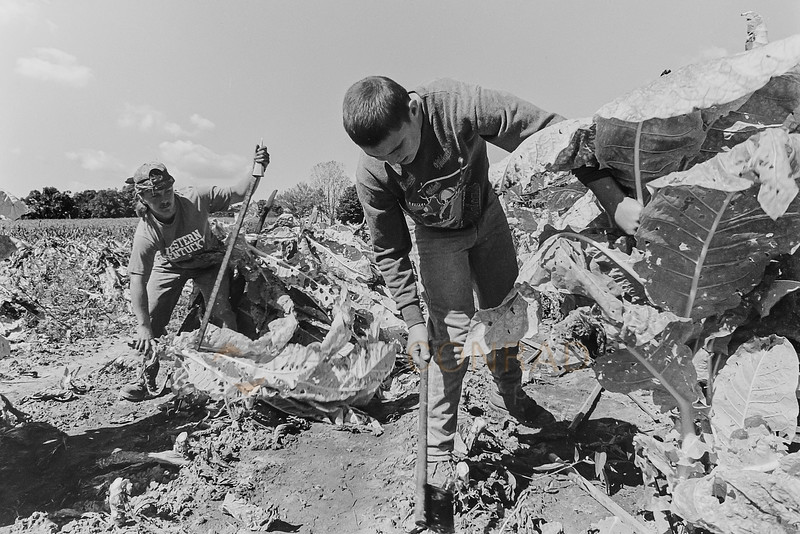 What was amazing is that everyone in the family worked the fields. Buck and Alpo were 14 and 15 respectfully, yet, they busted ass out in the fields after school. Usually I spend a few hours with Billy Ray and Nellie, and then later in the afternoon the boys came to the field when school let out.

While shooting, not only did I develop the film, I made prints of selected frames. While I was discussing my story with friends, one of the senior photo students was looking over the prints and said “This looks like Dorthea Lange shot it. Where the hell did you find them?”

“What We Have is Ours” 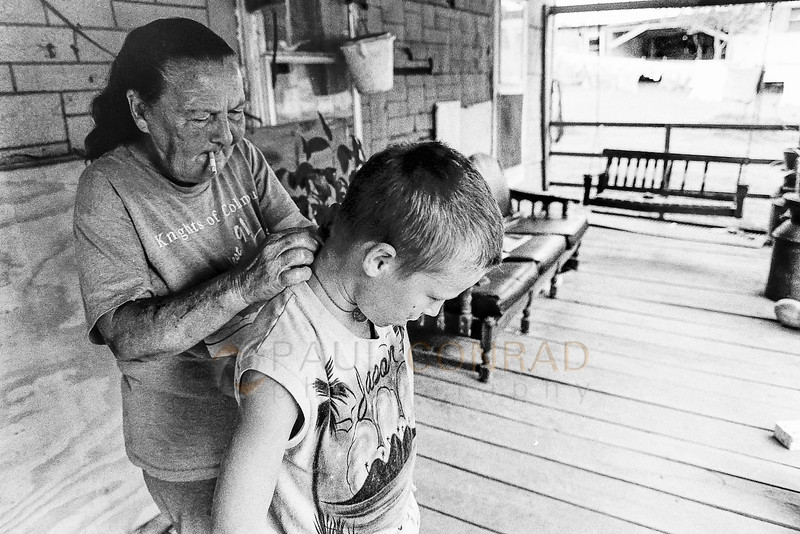 What We Have Is Ours – “We don’t have much,” says Nellie, “but what we have is ours.” Nellie helps Alpo with a necklace he found on his way to school. (© Paul Conrad/Paul Conrad Photography)

What I discovered is that these were not just simple poor folk who worked others’ farms to eek out a living, but rather a tight-knit, hard-working family full of love and compassion. They did not have much, but what they had a lot of, most of us are lacking. 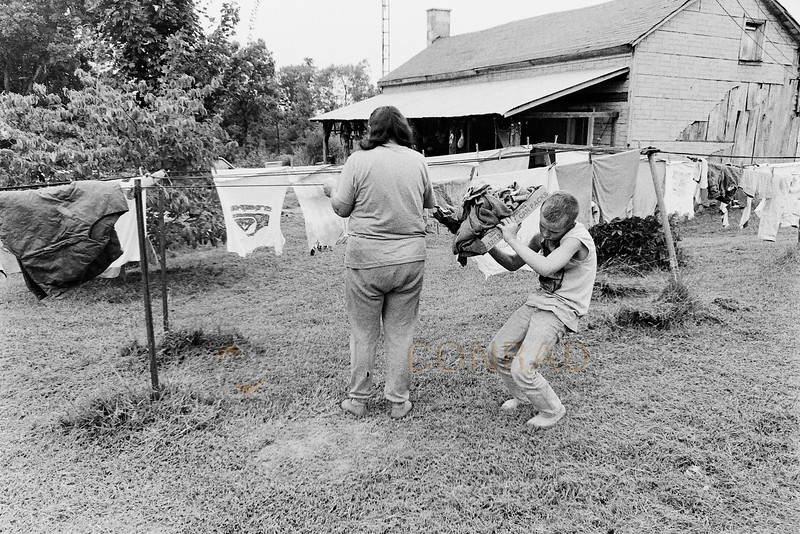 After “finishing” the story and making extra prints, I came back to their house to give them to the family. They gave me the time and courtesy to follow them and document their lives, I thought it was a nice “Thank You” to give them some prints. In typical Cardwell fashion, they gave me a box of veggies to take home. Fresh tomatoes, cucumbers, and others. 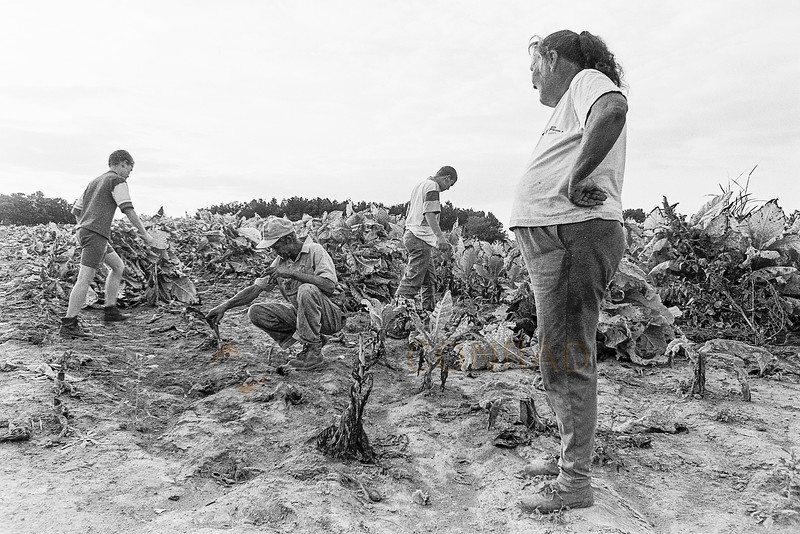 In spring of 1999, a few years after I finished the story, I ran into Billy Ray. He told me Nellie had passed just a few months earlier. It hit my heart as I knew how much of a loving a caring person she was. I left Bowling Green after college, and in the process lost touch with Billy Ray. I learned a few years ago he died in May 2011. May they both rest in peace.

What I learned from doing this story is not to pre-judge people who may seem poor, but to accept them. Allow yourself to become close so you can capture those quiet, yet compelling moments, to tell their story.