In response to this week’s The Daily Post for their Weekly Photo Challenge: Silhouettes I’ve re-written and reposted one of my favorite posts.

What Makes a Good Silhouette?

A good friend of mine once said to me: “You must be happy, you have your silhouette for the week.” Zach Ornitzz said this after seeing a photo of the cleanup from an apartment fire. It is actually a compliment. Silhouettes are fun and challenging to shoot.

When I was going to Western Kentucky University, one of the guest lecturers was Washington Post photographer Michael Williamson. He was going over his portfolio and a project he was working on when he said that if you are overstretched and can’t find anything to shoot, go graphic. And what a better way to go graphic than shooting a silhouette.

Wikipedia defines a silhouette as a view of an object or scene consisting of the outline and a featureless interior, with the silhouetted object usually being black.

The term was initially applied in the 18th century to portraits or other pictorial representations cut from thin black card.”

The term is said to be named after French Finance Minister Etienne de Silhouette who liked making the cut-outs of people’s profiles. It was a cheap art form for many of the poor at the time.

Contre-Jour is the technique in photography that is used to create silhouettes. It is simply placing your subject in front of strong light and exposing for the light. Therefore, your subject becomes black against the lighter background.

They are one of my favorite feature photos to shoot. They’re easy and, yet, challenging and I’ve had more failures than successes. My archives are full of failures. But I keep them to learn from them.

But when one works, it can sing. It’s not just a matter of shooting into a bright light and underexposing, you have to think in terms of elements.

For a silhouette to work, the elements in the composition must not merge. They should be distinct from each other and add to the overall theme of the image. Otherwise, it looks like a big blob rather than anything else. They must be clean. The main subject(s) should not meld into other subjects and stand on their own. Some of the best seem to be multiple pictures in one.

Some silhouettes will work if there is a slight overlap, but for most, keep them separate. Work the image until you see the elements separate. This may take time, moving, waiting for the moment, or simply pure luck. You may even have to come back and attempt to photograph the scene again.

Although sunrises and sunset are the easiest time of the day, you don’t have to shoot at those times. You can shoot them indoors, outside in the middle of the day, and even at night. You can use a light background. For example, the silhouette of hikers against a mountain range or baseball players against the bright sky. 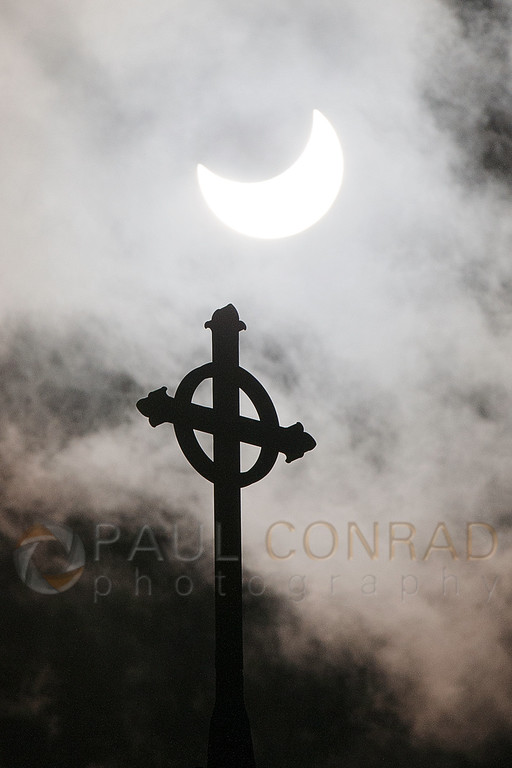 The one thing you must consider is keep the background clean. Again, the key is to keep the elements separate.

It means paying attention to the background and foreground. You may have to lie on the ground, seek a higher vantage point, use a light background, or any method that keeps the image exciting, fresh and different.

Sometimes a little luck goes a long way. When I was interning at the Ogden (Utah) Standard-Examiner, I had an assignment to photograph the Bullnanza in Hooper. It was an annual bull riding competition. I arrived about 15 minutes prior to the start and the sun was setting vividly in the west. As I was in the center of the arena taking light measurements, I noticed a group of cowboys at the top of the chutes. On my camera was a 300 f/2.8 lens so I grabbed a few frames before the cowboys dispersed and now you see the result above. It was a lucky shot.

Getting a proper exposure is rather easy. The light behind your subject is what you want to meter. Manual exposure mode is best. When in one of the automatic modes, the camera will attempt to compensate for the extra darkness by “overexposing” and you’ll blow out the background, hence, giving your subject some detail. This isn’t always bad. Some detail in your subject can add a little dimension.

Shoot something unique. Sure, shoot some clichés for practice, but go out and find some activities that allow you to shoot something different. There is a multitude of possibilities to make cool silhouettes.

Add a link in the comments with your sample of a silhouette that you’ve shot.