Yesterday was the perfect day for a hike.

So my brother-in-law Kurt, nephew John, and friend Darryl, headed out to hit Lake Twentytwo near Mount Pilchuck.

Although it was slightly cloudy at the trail head, it was sunny at the destination.

Trail 702 is a moderate trial which is 2.5 miles long with an elevation gain of 1500 feet. For the most part, it was rocky with some stream crossings and a bridge to cross Twentytwo (sic) Creek. 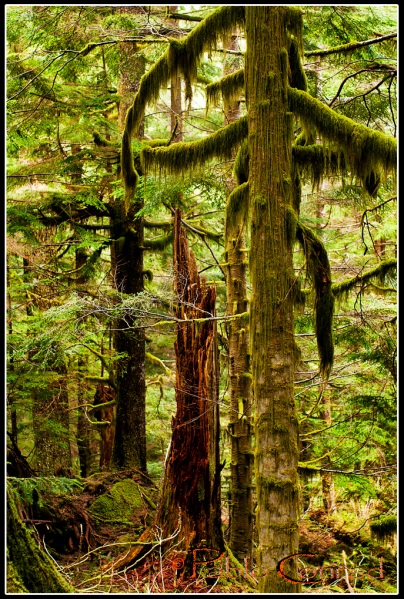 The moss-covered fir along Trail 702 heading to Lake Twentytwo

The beginning of the trail snaked through some fantastic green foliage from towering old growth trees, to budding flowers. It was a beautiful spring hike.

The trail was framed by a canopy of green. From the moss-covered trees, to the fresh fern, to the new leaves of plants. The sun peeked from behind the clouds and filtered through the canopy at times. Its rays highlighting the moss coats of the trees and ferns below.

Every hundred yards or so, the run off from the melting snow-covered the trail, or cascaded from the outcroppings of exposed rock.

The huge old growth trees towered over their younger siblings. Hundreds of feet high, their age was shown by the outgrowths of branches and their enormous trunks.

We took a spur off the trail the went over the moss-covered floor which cushioned our steps into silence. My fear was I’d step onto a soft spot and fall into a hole.

As we walked along, the clouds began dissipating and only a thin layer masked the rays of our parent star. It became warmer.

We crossed a boulder field that allowed a view of the Stillasquamish River valley.

The last three-fourths of a mile was snow-covered. Fun, but cold. Reminded me of my many hikes in Colorado, but only 10,000 feet lower.

As we approached Lake Twentytwo, we could hear the grumblings of the mountain. The unsettled snow sliding down couloirs forming ever-increasing fields of whiteness.

The high ridges formed by eons of glaciation created a jagged contrast against the soft clouds and blue sky. The warming temps made the snow heavy and as it lost its fight against gravity, slid down the mountain in a thunderous roar.

The lake was serene. It’s mirror like surface reflecting the spiky ridgeline and snow filled couloirs. But there was no angle from the snow-covered shore to capture the tranquil beauty.

As the lake was very shallow, I took a chance and stepped into its frigid waters. The slowly walked to the center. Paying extra careful attention to the slippery algae on the bottom.

When I found my position, I frigidly waited for my wake to quiet. Then began shooting. The one time I don’t bring my tripod, due to the excess weight, I needed one.

As I stood there in the numbing coldness of snow melt, the serenity hit me like the Tasmanian Devil on crack.

The cold no longer bothered me, so I kept shooting.

The crackle of a woman’s voice broke me from my trance. Another group of hikers appeared and commented on my photography technique. Yep, time to get out.

The way back was just a nice. The moss-covered trees were lit by the sun this time as it moved along its elliptic.

The gear I used:

For most of my hiking trips, I like to take my gear and use my Camelbak Ridge Runner pack. It’s roomy and I can take a reasonable amount of gear.

With 100 ounces of water and the following gear, the weight is about 20 lbs.

As I like to bring extra socks even on a short day hike, I used them as cushioning around the extra lenses, batteries, and flash. The to waterproof them, I used zip-loc freezer bags.

My extra jacket was used as padding around the gear. As I wanted to carry enough water for the hike, and gear, the Camelbak worked great.

It just takes a bit of organizing how you pack it to make everything accessible. Especially the longer glass, batteries, and cards.

I’ve gone hiking with my Lowe Pro Mini Trekker AW before, but I didn’t like the inability to carry survival essentials, water, water purifier, extra clothes, and maps.

After all what good are all those cool photos you just shot if you can’t even get home to download them?

All in a day’s work.

Now to get ready for the next one.

Thank you for stopping by and reading