During my Advanced Photo Editing course at Western Kentucky University, one of my professors, Pulitzer prize winner Tim Broekema, said to have perspective in contests. 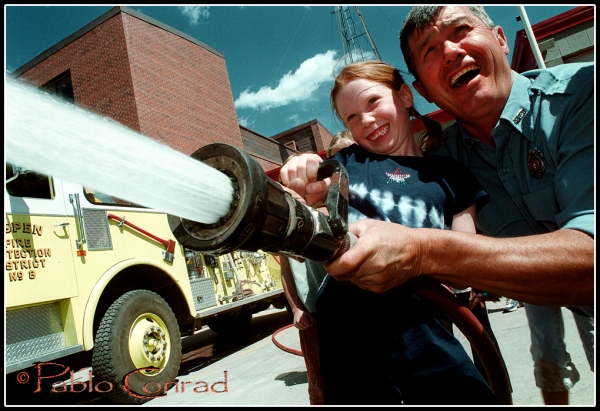 Aspen Elementary student Molly Rosenstein, 7, is helped by Capt. Jess Graber of the Aspen Volunteer Fire Department during a visit to the fire barn. My editors at The Aspen Times wondered why I did not enter this in the yearly contest. They said it would’ve won.

As it was the end of the school year, we were talking about editing our portfolios for late-announced summer internships, selecting images for upcoming contests, and basic design of our packages . That talk turned to awards.

What what Mr. Broekema said was eye-opening: Contests are fickle. Take them with a grain of salt.

He talked about his portfolio that won him the NPPA POY Sports Photographer of the Year. His portfolio of images he shot while he was the sports photo editor at the Chicago Tribune. Many of the images were from the 1994 Winter Olympics in Lillehammer, Norway. 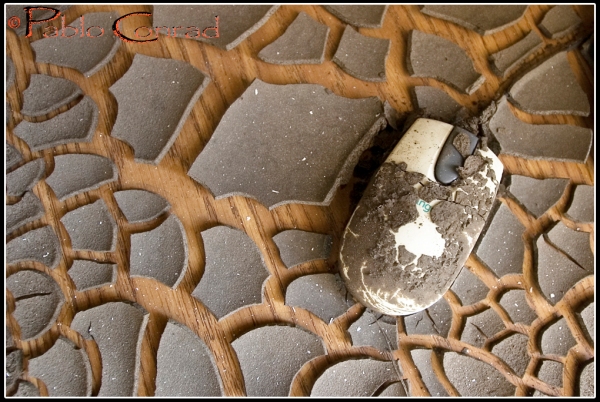 Cracked mud creates a pattern around a computer mouse in an Charles P. Murphy Elementary school classroom six months after the storm surge caused heavily damaged Pearlington, Miss. When I attempted to enter this image in the NPPA’s POY Pictorial category, the category was cancelled for that year.

He said if one of the judges didn’t like winter sports, didn’t like even one of his images, or even had a cold, his whole portfolio could’ve been tossed out and he would not have won the award.

Judging images relies on the feeling of the judges and what they like. One year, you may have judges that want hard news, in another, you may have one that wants to see beauty. It’s all subjective.

In the New York Times’ blog Lens, NPPA News Photographer Magazine editor Donald Winslow states that while reading the journals of the late Eddie Adams, he read that Adams did not want to win the Pulitzer for his “Execution in Saigon” photograph, rather, he wanted to win for his photo of Jackie Kennedy being handed the flag which draped the coffin of John F. Kennedy. Read more here “The Pulitzer Eddie Adams Didn’t Want.”

He lamented not winning for his photo essay of Vietnamese refugees in “Boat of No Smiles.”

In the comments, one respondent named “dercka”  refers to a story about Eddie Adams and how he perceived awards. He was to be interviewed about his work.

“My favorite Eddie story is about an interview in a home office of Eddie’s long ago. The writer asks Eddie how long he’s been into woodworking and Eddie say what do you mean. Writer says I see all that nice wood stacked on the shelves there. Eddie walks over grabs one, blows off the dust and shows the writer. They were bunches of plaques from photo contests collecting dust.”

This shows what Mr. Adams, and other photojournalists feel about contests and awards. They’re nice recognition, but our job is not about us or our perceived greatness: “It’s About Covering Our Communities.” 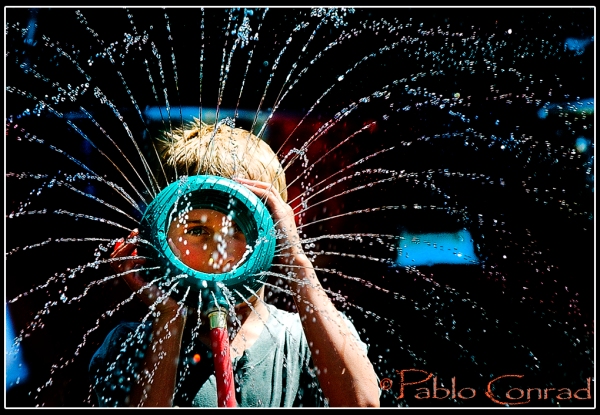 A kid plays with a hose at the Aspen, Colo., firehouse during the department’s annual 4th of July BBQ. One of my editors substituted this photo for another. It won 2nd place. I didn’t enter it because I didn’t like it.

Don’t get me wrong. Winning a contest is an affirmation of how well you’re doing. But not winning, although disheartening, is not a big deal. Shrug your shoulders and keep shooting.

Also, just because you entered a photo and it didn’t win, don’t assume it’s bad. If you like the image and feel it is one of your best images, by all means then it is.

I’ve entered contests and have won, and have lost. I’ve had editors change my entry and I’ve won with a photo I didn’t like. I’ve had photos not entered because someone felt they “didn’t follow the rules.” I’ve had photos I couldn’t enter because the category was discontinued: Muddy Mouse from my essay Overcoming Katrina.

But the key is: Enter. You will never know unless you enter.

Also, by entering, you get your name out there. Editors looking for fresh talent are looking at these image to see any new photographers. 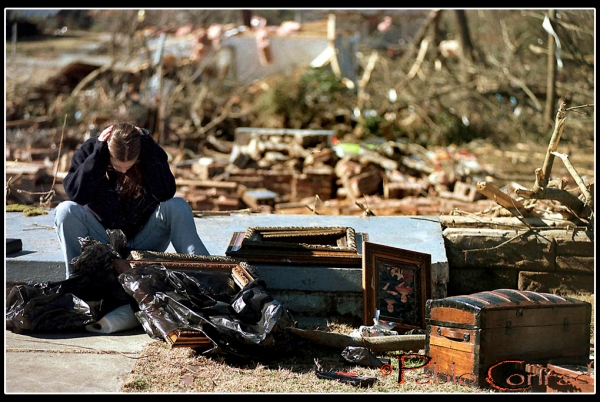 Meredith Dorris sits on the remains of her grandmother’s porch in Jackson, Tenn., after a tornado ripped through the area killing 8 people. This image took 2nd place in the KNPA contest.

Also in that batch were a myriad of other photos: feature, portraits, sports, and illustrations. I believe we were allowed 20 total images per individual. My photo editor pulled a third spot news photo saying “having more variety gives you a greater chance of winning.”

During my last year and a half of college, I was a staff photographer at the Bowling Green Daily News. I had to work that Saturday of the seminar. While I was finishing up for the day, my friend and co-worker Clinton Lewis called me.

“We swept Spot news,” he said when I answered.

Clinton added that I also won in the Features and Portrait categories. The photo staff won Div II Staff of the Year. 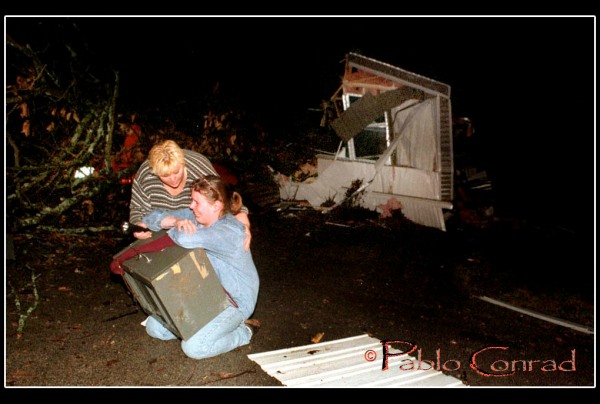 Sherrill Smith comforts Kathy McKee of Bowling Green, Ky., after her home was destroyed by a tree, toppled by fierce winds, cutting her home in half. This image was pulled so my contest portfolio could have more variety.

I screamed like a little girl. It was exciting. I was excited. Being so close to graduation and earning my BA in photojournalism from WKU, this would definitely help in my job search.

But I think back and it seemed after a couple of weeks, the excitement waned and eventually wore off. It was cool to have the plaques on my wall, and made my resume stand out, but I soon realized that I had to keep pushing myself to get better.

While at The Aspen Times, each year, the Colorado Press Association had it its annual “Better newspapers Contest.” As part of the rules, we had to enter clips. As a result, it was very frustrating to go through newspapers and find the images I wanted to enter. And I would make a bad call on occasion.

One year, my editors asked me why I didn’t enter a certain photo. Because I didn’t like it. In another year, I had one entry pulled and another entered with out me knowing. So it was quite a surprise when that photo one in the features category.

The key to contests is to enter. Just enter. And enter the images you like. Not one you think will win.

My goal is to keep capturing images that tell stories, that enlighten readers.

To give a voice to the voiceless.

And this is the real purpose of photojournalism.

Thank you for stopping by