Last night it was sooo cold, I swear I saw a dog pee ice cubes. 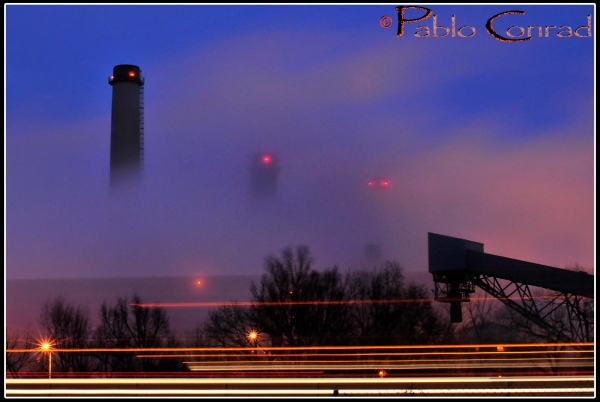 As the sun set behind the Colorado Rockies, the sky remained bright. Soon the temperatures plummeted 20 degrees in less than 15 minutes.

The steam from the Martin Drake Power Plant looked like a massive fire as the orange street lamps glowed from within. The stacks stood out from the steam like a lighthouse enshrouded in the sea mist.

The bitter cold chilled me and my girlfriend Heidi to the bone. After 15 minutes of photographing it, we decided it was time to leave. So we grabbed the camera and tripod, bitter cold to the touch.

Then from the east as the clouds parted, the Moon shined its countenance upon the plant. But it was low on the horizon. Seeing the potential, we stayed and braved the glacial temperatures and biting winds.

The breeze kicked up and the steam, once rising to the touch the sky, it now skirted low along the ground, engulfing the low buildings and the bottom of the stacks.

Then from the east, the Moon beams lit the steam and gave the clouds a silver lining.

Waiting was well worth it as the moon peeked from behind the clouds.