That’s right. Santa, in his B & H disguise, sent my new D300s, MB-D10, cards, and extra batteries. All I did was stare and rub my hands together. The excitement building in me. 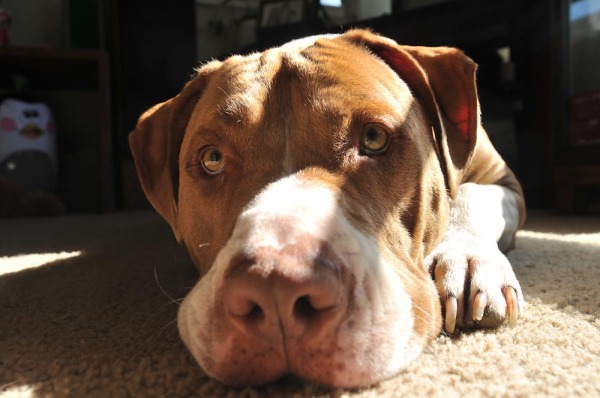 Buddy lies in the sun. One of the first photos from my D300s. 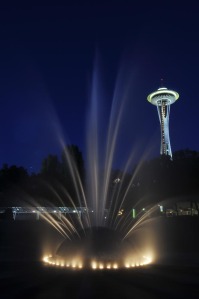 A 15 second exposure of the International Fountain and the Space Needle in Seattle, Wash.

I was a kid on Christmas day. With a grin from ear to ear, I envisioned what photos I may be taking with my camera. Without any hesitation, I began opening up those boxes to reveal my new toy, er, tool. It was exhilarating.

I was so anxious to put it together and test it out. I had to step back and really think about how to open the boxes. I didn’t want the excitement to overtake me and accidentally drop my camera onto the floor.

As I stood there in disbelief, I thought to myself,” Wow, my first new camera in over 4 years. Holy crap.” Don’t get me wrong, I love my D200. That camera took some serious abuse from me and it still give s me good images. It’s in great shape, but it’s time to upgrade for the technology. Hell, I still use my F-5 once in awhile. An I’ve had that for over 10 years.

So with a deep breath, I tore into the boxes. Only to be confounded by those darn packages for the CF and SD cards. My goodness people, do you have to use Uber Super Glue to put them together? And what’s with all the cardboard? Ugh.

I pulled out the MB-D10 vertical grip and looked it over while reading the instruction book. One of my teachings is: know your gear. I read with enthusiasm all 3 pages of the user’s manual. Last thing I wanted to do was forget to take off a plastic protector and ruin the grip, or worse, the camera.

Then I opened the box for the D300s. Wow. More cords came in the box than what they used for the Eniac. Of course, there’s also more electronics in the camera than what was used to put a man on the moon during the Apollo missions. 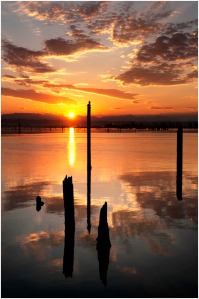 The sun peeks over the Cascade Range in western Washington as seen from Priest Point in Tulalip north of Seattle.

With the camera unwrapped, I began looking over my new toy, er, tool, so I can get familiar with the controls. Most are what I like to call Nikon standard. I’ve used Nikons since I bought my first F3 back in 1984 (OK say your old man jokes). The camera felt very familiar. It felt good in my hand.

I was stoked. But one problem, I had to charge the batteries before I could even think of using it. Ugh. But it gave me the time to read the manual. The really thick manual. Holy cow is it thick.

I jokingly tweeted that it was as thick as one of my Bibles, but the reality is, it’s a thick book. And it’s only in English. The Spanish manual is just as thick. But I had to read it in order to set-up my camera the way I wanted it. And the last thing I wanted to do was set something and not be able to figure it out what I did when the camera goes haywire. Heck, I still have mine for my F5 if I ever need to change something.

Luckily, My D200 batteries are the same so I threw in one of those and began changing the settings to those similar to my D200 as the new batteries were charging. Things like AF-On, RAW + Jpeg, etc. Even with the book, it took a little while to set my settings how I like them. Setting it up to the same general specifications as my D200. Consistency, consistency, consistency.

When I work with two bodies, the last thing I need to remember is which one I’m shooting with. One of the bodies has my 17-35, and the other sports the 80-200. In breaking news, you may not have time to go: “Oh, this is my D300s with theses settings and I need to do this.” So having the settings very similar keeps confusion to a minimum, so the chance of missing an important shot is reduce to near zero. 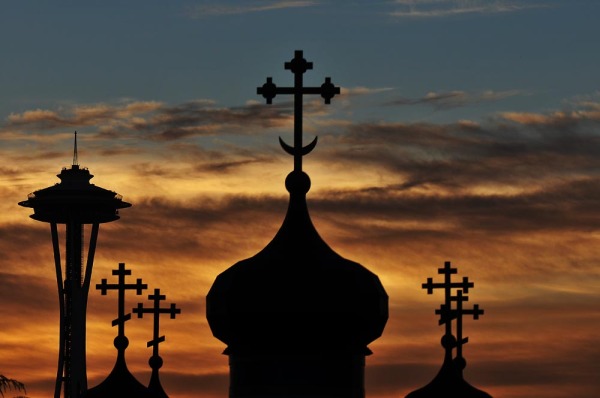 The sun sets behind St. Spiridon Orthodox Cathedral and the Space Needle.

Just doing that took about an hour or so. The menu is similar to the D200, but there are minor changes and some additions. Especially the additions relating to video. And I got rid of that annoying “amateur beep.” Like I need the camera to tell me the light is low and so I use flash. It was the first thing I disabled.

What I find amazing is that there is not an ISO 100. There is a setting that is equivalent to that, but not and an actual ISO 100. And with all the reviews out there about the minor issues of using Lo-1. I like the lower ISOs because of the ability to use fill flash with less depth of field. I read about the highlight clipping in the Lo-1 mode, but to me that’s not that big of a deal. There’s a solution for every problem. 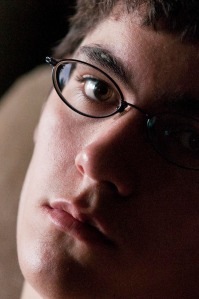 My nephew Frederick pauses while playing Halo Reach on XBox. Shot at ISO 3200.

While shooting it, there are some things that absolutely impressed me. Image quality is stupendous. It’s noticeably better than my D200. The clarity of detail is amazing. I zoomed into the eye on the photo of my niece Kianna and could actually see the her fine eyelashes, and the reflection of the hummingbird feeder in her eye. Wow.

The high speed mode is quick at 7 frames per second. Now, my F5 is considered one of the fastest film cameras at 8 frames per second. This is nice as I like to shoot sports. But I’ve also learned how to anticipate moments with the slower D1-H and D200. Hell, I shot Women’s World Cup ski racing with a D1-H and D200 and still got some fantastic images. So I might just set it on C-low at 4 fps to keep my skills at anticipating the moment.

I honestly believe there’s a lost art of shooting sports with the  slower cameras as it took some skill to capture great moments and get some nice images.

So once I had the vertical grip on, and batteries in the chambers, I threw on my favorite lens: my 17-35 f/2.8. My first photo was of my nephew John’s dog Buddy. as he lay in the sunlight streaming in from the window. Then my niece Ashley came over with her almost 2-year-old daughter Kianna. She likes cameras so she came over as I was looking at the images of Buddy on the back. She stared at me so I fired off a few frames while she gave me the “What you doing?” stare down.

After that, I packed everything up, and headed to downtown Seattle. My first stop was at Glazer’s Camera to buy a good strap. I don’t like the ones the camera manufacturers give you. I paid for the camera, why should I advertise what make and model it is. 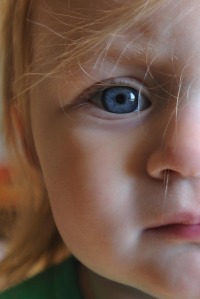 Curious, my great-niece Kianna tries to give me the staredown. Tight crop from a horizontal.

The last time I shot it was when there were a ton of construction cranes blocking the view of the Space Needle. They were very distracting and it was very difficult to get a clean photo.

I love to play tourist and all that fun stuff in my hometown. It was great. I took some evening long exposures of the fountain and the Needle, some sunset shots, and a few of this and that.

Later in the week, I tested the ISO 3200 setting and was amazed. My nephew Frederick was playing XBox and the light from the window was lighting him beautifully. So I shot a few photos. The near absence of noise at the higher ISOs was stunning. There was some, but not much.

And definitely not as much as my old D1-H. Which I still have and collects dust. But it’s a keepsake.

To this day I still remember the first time shooting an assignment with a NC2000e. It was 1999 and I was working for the Bowling Green Daily News during my last year in college at Western Kentucky University. It is essentially a Nikon N-90 with a Kodak back that had a 900K sensor. It was slow, cumbersome, and heavy as hell. Downloading the images was extremely slow, even for that small of a file size. Rob Galbraith has a wrtie up about the old beast: A Look Back at the NC2000e

What a change the digital world of photography has experienced since those early days.

Overall, it is really fun learning how to use my new camera. I’m amazed at the picture quality, the near absence of the higher ISOs,the ease of functionality, and the overall feel of the camera. I believe it was a really good purchase.

Soon, I’ll be playing with the video function of the camera. But that’s a whole separate bag of worms.

Here’s a few photos from this week with some descriptors.  That’s pretty much it for this blog entry. I hope it’s not another 4 years before i get another camera. It seems like the technology is advancing every year.

Thanks everyone for looking. 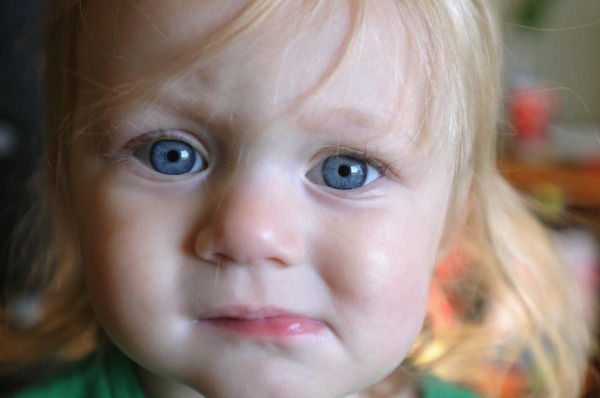 Kianna loves to be the center of attention.