UPDATE: As it seems this controversy is arising again due to the earthquake in Japan, Many are beginning to question why so many photographers are heading to the region.

What I find most disturbing it that it is less of an issue now, than when Haiti was hit with a 7.1 quake.

Donned with a multitude of rosaries, A headless statue of the Virgin Mary rests on the steps leading to St. Joseph's Catholic Church in Pearlington,Miss., after Hurricane Katrina devastated the town.

There’s an ongoing controversy about photojournalists rushing to the scenes of major news events. The most recent targets are those rushing to Haiti, the nation devastated by a 7 point earthquake.

One of my group memberships is PJ Afterschool at Yahoo. It’s an on-line community of Western Kentucky University photojournalism students, teachers, and alumni. You can post photos, news articles or anything of interest.

My in-box recently exploded with e-mails from the group concerning fellow alumnus Nathan Weber going to Haiti to cover the disaster. Without any financial backing, assignments or support, he went. He began transmitting images soon after he arrived. They can be seen on Vellum Media’s website.

Arguments for and against journalists rushing to the region were presented. Some lauding Weber for his efforts, some critical. It was a good discussion bringing up ethical viewpoints for and against coverage. Most of the arguments were in support of Weber.

The arguments against going were simple. Going would be an extra burden on relief and aid crews. You’d be an extra body in the way. You would use vital resources (water and food) that should go to victims. You are a vulture feeding on the helpless.

The arguments for, in my opinion, are stronger. You’re covering a major catastrophe and providing images that may make others see the need. Those seeing the need may take action and volunteer, or donate money to a cause. In short, your work may help those in need.

“This conversation seems to stem from Weber’s motives. Well I have no idea what his motives are, but looking at his images I am reminded that people in Haiti are in desperate need. I have been moved. And is that not enough?  To move one person into action is a victory. To change policy, to better society, is an honor and to save a life……well that is our mission. Isn’t it?”

Group member Albert Cesare brought up the valid point that we are schooled in the First Amendment, yet we tend to discourage free thought.

“We talk of first amendment rights all the time,” Cesare writes, ” yet I feel that we limit are own
people in these discussions more often than we encourage.”

During my college days, we had these discussions. They ranged from covering war to house fires and accidents. But it always seemed to me that those who argued the loudest, didn’t cover breaking news. And from my personal experience, I truly believe that covering breaking news has value.

Chicago Tribune photojournalist Scott Strazzante posted on his blog, Shooting From The Hip, his feelings about those rushing to cover Haiti. In his case, he feels “a tiny bit jealous.” I too feel a bit envious to the photographers rushing to Haiti. It is one of the biggest natural disasters of the last 100 or more years.

I felt this envy, or jealousy, after the Sept. 11 attacks, the 2004 tsunami in Indonesia, and Hurricane Katrina and other natural disasters. 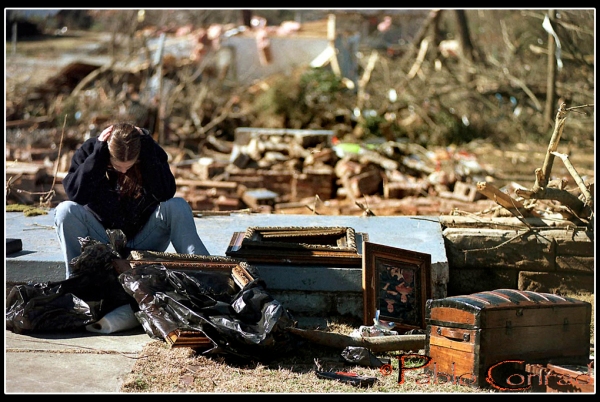 Meredith Dorris of Memphis,Tenn., sits on the remains of her grandmothers porch in Jackson, Tenn., after a tornado ripped through the area killing 8 people in January 1999.

But, I’ve become less envious and now look for ways to help from the location I am at. In the case of Katrina, it was a matter of looking for local stories of relief efforts and volunteers in the Roaring Fork Valley. As a result, writer Scott Condon and I advocated, and won, that we go and cover the story from the disaster zone.

These events need to be covered. People need to be informed. And informed people will make the right choice.

The 16th president of the United States, Abraham Lincoln, is quoted as saying:

“I am a firm believer in the people. If given the truth, they can be depended upon to meet any national crisis. The great point is to bring them the real facts.”

Limiting journalists, either physically, through intimidation, dissuasion or criticism, access to crisis like these will be detrimental to the recovery effort. When we limit the action that can be taken to help, we limit the ability of those affected to recover from these disasters. And then we as a human race suffer the consequences. 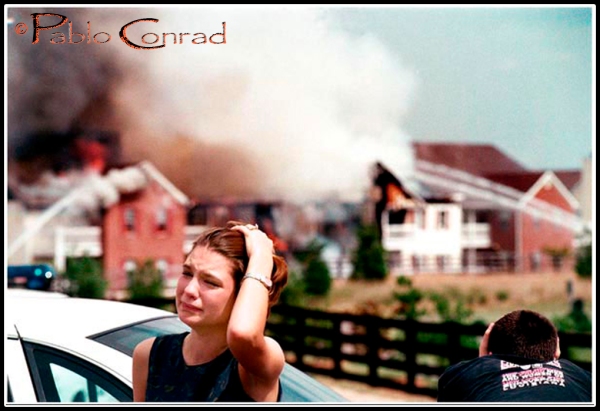 So if something deep inside is telling you “I must go,” then go. Follow your heart and cover that story. You’ll only regret it if you don’t.

Just be safe and use your head.

Thank you for reading