After spending some time photographing the monks performing for the crowd, I wanted something different. I followed this monk as he walked through the park. I liked the lighting and serenity, but needed some interaction with the locals. About 45 minutes later, this little cowboy showed up.

Ever wonder how some photographers always seem to capture intimate spontaneous moments?

It’s simple. They use the most important tool they have in their photographic toolbox: Patience.

There are a lot of photographers that rush in and start banging away on the shutter button without really thinking.

I’ve done it myself  a lot, usually when I don’t have the time as I have less than an hour to be at my next assignment or working a tight deadline.

Rushing just causes you frustration in the long run. Not just the feeling that you did a poor job, but also when your back at base editing your images.

You’ll be frustrated at the poor selection of images you have causing your final edit to be difficult. And you’ll usually say “Why didn’t I wait a few more minutes.”

Landscape photographers know you can’t just drive to a lake and photograph the scene. You have to know what the weather will be like, have an idea of which direction and time the sun will rise or set, and know it may take several visits to capture the image they want.

Wildlife photographers must know the habits of the animal. Their migration patterns, eating habits, and any other information required in order to photograph it in all its glory. Then it may take multiple trips. Study the work of Thomas D. Mangelson. His famous “Catch of the Day” photograph took quite awhile and quite a few trips to capture it. His other work also shows the patience he has for documenting wildlife.

While covering a Veteran's Day event, I knew the Blackhawk had to take off. As the time got close, I sought out a good composition and waited. I did not expect the girl's reaction.

Photographing people are no different. Humans, too, are creatures of habit. Knowing and understanding their habits will help you capture moments that tell the story and be natural. It’s just a matter of time.

The really good photojournalists understand this. They don’t just run in and begin shooting everything. They find out what is going on. They find out what the story is. They watch and observe in order to find where the moments are and they begin working the scene. 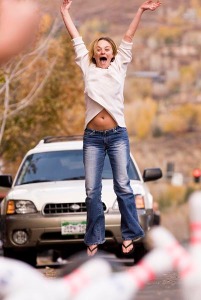 Resort towns in Colorado morph into ghost towns during off season. As a result, one was forced to walk all over and look for daily features. I found a group of locals bowling in the street. I captured this after pre-composing and waiting about 20 minutes.

Rather than be frustrated for missing a moment, the  good photographer will seek and find the composition as they work the scene with a variety of lenses: wide, medium and tight. Or another way to put it, from an overall scene setter to close-ups while working a lot of angles.

As they work, compositions begin unfolding. They find the composition they feel best tells the story and then wait for all the elements to come together. It may be a few minutes or it may be a few hours. You just don’t know.

Sometimes it just doesn’t happen. But they’re not discouraged. Water off a duck’s back. Just go out and keep trying. It’s part of photojournalism.

They key is not to give up. Yes it can get quite frustrating as you wait. Yes, you may get bored. However, if you know that by waiting you will get the best photo, then the wait will be worth it.

And as Louis Pasteur once said, “Luck favors the prepared mind”

Prepare by seeking the best composition (pre-composing) and then wait for the perfect moment to happen.

You’ll be glad you did.