“You are what you say you are”

It’s true of any profession. There are nick names for those in that profession that may be more commonly used, not because it is more accurate, but because they are more ingrained in the vernacular. Nursing interns are “candy stripers,” electricians are called sparky, and photographers are called shooters.

The word “shoot” is not a bad word, but, it surely doesn’t help when we photographers use that word during regular conversation. “Whatcha doing this weekend Paul?” “I think I’m going to Pike Place Market and shoot some pictures.”

Someone who has no idea about who I am may be thinking: “What’s he going to shoot at the market?” Of course the reality is they’ll just ask what camera will I use. But the mere use of the word connotes some form of violence.

It’s a serious enough word that when on an assignment to cover the Democratic National Convention in Denver last year, I learned not to say the words “Obama” and “shoot” in the same sentence. Luckily, I was “gently” scolded by a Secret Service agent outside the press room when I mentioned “I couldn’t wait to shoot Obama on Saturday evening” to a friend who was also there covering the DNC. The agent quietly said to use the word photograph. Wow.

There are other ways that word can be misconstrued. There’s been a few times I had to photograph a building or house to run with an article and I’d overhear the writer say: “Oh the photographer’s just going to do a drive-by shoot.” Ummm. I’m not in a gang.

Another is the word “take.”  We’re not really taking anything. And then there’s “capture,” as in capture the moment.

The vernacular make me laugh sometimes. 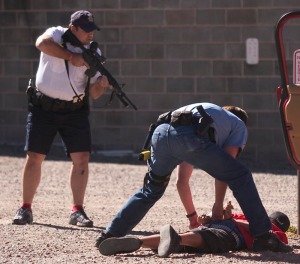 Aspen police sergeant Bill Linn handcuffs a suspect as another keeps watch. Several youths were arrested when they aimed BB guns at pedestrians from their car.

While many people may say I’m a photographer because I use a camera, I say I’m a visual journalist. Not only do I use my camera, I also use a notepad. When working, I take notes, lots of notes. Notes about everything. Names, numbers, quotes, time, etc.

Taking notes is very important especially while covering breaking news events. I was once scolded by my friend and colleague Naomi when upon returning from the scene of an accident, I failed to get the name of the officer in charge and any other information that would help her get the story. And as it was close to deadline, she was busy fine tuning an article she needed to finish.

But, the worst possible thing that can happen is capturing a great frame and then realizing you don’t have the subjects name. Or while writing the caption, you are drawing blanks because you have very little information to work on. Or you have the names but you forgot to write down something simple to identify them. Never rely on the writer for information, they probably won’t have it.

I’ve done this several times and my heart would virtually stop each time. It is the most frustrating thing to happen. You can not publish a photo with an identifiable person in it if you don’t have their name. Especially if you work at a smaller daily newspaper. I’ve never felt comfortable publishing photos without having the subjects ID’d. But that’s an ethical debate for another blog. 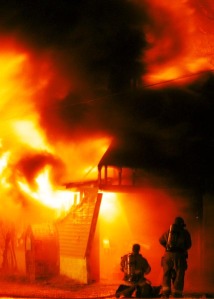 When I was designing my business card and updating my profiles, I did come across this argument: What do I call myself? But then I remembered those simple words from Kenny Irby. So I call myself a photojournalist.

I’m not  just a photographer, I’m also a journalist. And I know how to write. Not great, but better than the average bear.